Programming Languages and Compilers are currently very high on the agenda, most recently with Apple’s launch of the Swift Language for iOS on WWDC this week, and also with the increasing popularity of languages like Erlang (e.g. used by Facebook’s WhatsApp), Google’s Go, Clojure, and Mozilla’s Rust. In fact, the Swift language was inspired by several languages: Objective-C, Rust, Haskell, Ruby, Python, C#, CL – according to its main developer – Chris Lattner

There is also significant research on new programming models, e.g. in the Envisage project we’re developing the ABS: A Core Language for Abstract Behavioral Specification (http://abs-models.org).

But all of these language stand on the shoulders of an earlier language – Simula – acknowledged as the first Object-Oriented Programming Language (developed by Ole-Johan Dahl and Kristen Nygaard at University of Oslo).

Video of going through code
https://www.youtube.com/watch?v=K1ar0EcbpQ4&feature=youtu.be

(Parts of) The Simula Code 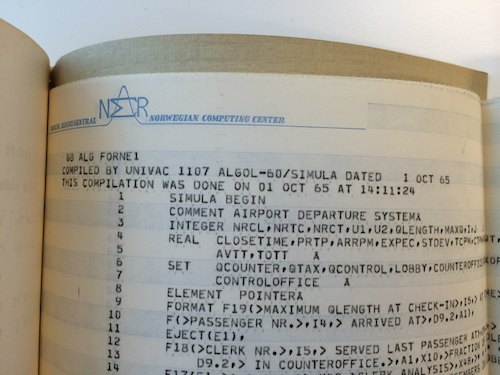 Today I was fortunate to hold a piece of programming history in my hands – an original technical report – containing what is likely to be the first Object-Oriented Program ever written and published. The report is called “SIMULA EXAMPLE NR 1: AIRPORT DEPARTURE SYSTEM By Kristen Nygaard”. 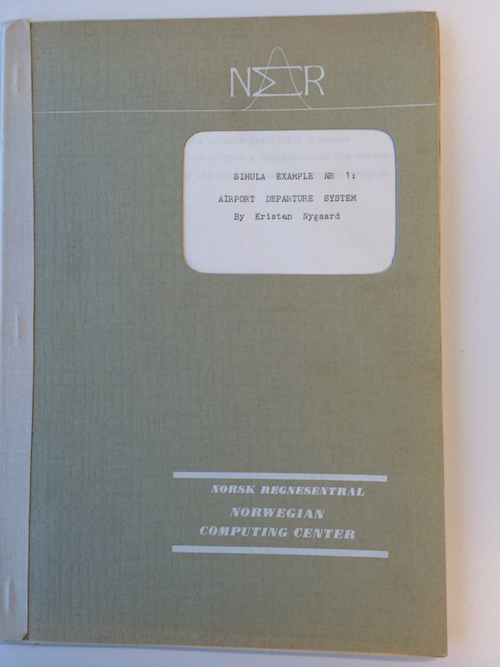 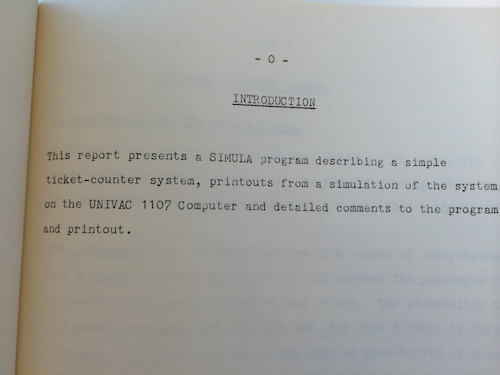 Introduction: This report presents a SIMULA program describing a simple ticket-counter system, printouts from a simulation of the system on the UNIVAC 1107 Computer and detailed comments to the program and printout.

Thanks to Rudi Schlatte and Professor Olaf Owe for letting me have a look at the report!